How amazing and valuable this day is! I feel so incredibly lucky to be born on such a beautiful day as THE INTERNATIONAL WOMEN’S DAY! And I take that as both a gift and a responsibility from the universe.

I hope as many people as possible will take part in the various events and demonstrations happening worldwide on this very important day! I am really looking forward to marching through Bergen and listening to important speeches by awesome people later today.

I want to say THANK YOU to the feminists that came before me and has built this movement from nothing. The women that has dedicated their lives to fighting the injustice our gender has had to face through history. The women that dared to stand up and demand their rights, without having anyone to model what that looks like. To the entrepreneurs of feminism: thank you!

But this is also a day to acknowledge the work that is still needed before ALL women get the rights they deserve! Because honestly guys, we still have A LOT to do.

☮ Today I will march for the millions of underaged girls that are being sold as child brides every year. Girls that are forcibly married away as young as 7 years old, having their childhood stolen from them. At its heart, child marriage is rooted in gender inequality and the belief that girls and women are somehow inferior to boys and men. In many of the countries where child marriage finds place, the girls are seen as a burden for the family. Marrying away a daughter at a young age can be viewed as easing economical hardship.Child marriage is also based on patriarchal values and wanting to control the female sexuality: how she should act, how she should dress, who she is allowed to see, etc. Childhood is not for cooking, cleaning and having babies, its for education and having fun with friends.

☮ Today I will march for the LGBTQ+ women all over the world that lives in countries where they can’t safely express their gender identity and/or sexual orientation. LGBTQ+ women (especially transgendered women of color) are being disproportionately affected by hate crime, discriminated against in job hiring, housing and health care. We have to keep boldly resisting those who seek to turn back the clock and keep fighting for the rights many LGBTQ+ people have not yet attained.

☮ Today I will march for the women living in countries where abortion is illegal. Abortion rights is important because what it basically comes down to is the question about whether or not women should have the right over their own bodies. The criminalization of abortion affects the women that needs in the most and has the least resources and makes an already hard situation even harder. It’s a way to suppress women and take away their rights to choose what’s best for themselves. It will also lead to more illegal abortions which is extremely dangerous and may result in the woman being severely injured or in worst case lead to her death.

☮ Today I will march for young girls feeling like they have to look like supermodels on Instagram to be valuable. Girls that are growing up in a society where «likes» serves the purpose of a self-value currency. A society where unattainable beauty standards is what you measure yourself against while constantly being bombarded with messages like «Get the perfect bikini body» and «lose weight with this detox tea». A message that feels like a badly camouflaged «you are not good enough as you are. You have to change to be desirable».

☮ Today I will march for the female non-human-animals like cows, that are being forcefully impregnated by humans so that we can use and exploit their bodies for our own wants of their breast milk and flesh. The mother cows that has their baby calves ripped from them and experiences immense emotional trauma. The ones that has no voice to defend themselves against the harm that are being done to their bodies over and over again. The female cows that after serving humans as a slave for the entirety of their short lives gets nothing but a knife to their throat or a bolt in their heads. As controversial as it may sound for me to include animals on the international women’s day I still chose to do it because this is gender based violence and as a vegan I feel like it’s my responsibility to also include the female non-human-animals although I don’t expect everyone to do the same.

As a white, cis-gendered human female born in Norway I recognize my privilege. I know that in many ways I have it a lot easier than many other women out there. I don’t have to deal with forced marriage, being denied abortion or not being able to express my gender identity, and for that I am forever thankful. But that does not mean that I haven’t had my struggles growing up as a woman in this world. I believe that sharing our stories and dearing to be vulnerable is important to start discussions and contributing to change, so that is what I’m gonna do:

I never had a problem with my body before others pointed out the faults of it. Sadly, that wasn’t too many years in to my life.

Beginning school, my body quickly became a source of shame. I was bullied a lot for my size, and the words stuck with me. I gradually developed a habit of overeating, letting food be a source of comfort. Naturally, this only resulted in me getting larger, and I found myself stuck in a dark self-reinforcing sircle. I started believing the mantra that was being repeated to me over and over again, and at some point between age 14 and 16 I found myself being absolutely disgusted with my own body. I had hit rock bottom. But when I became victim to sexual abuse I found out rock bottom had a basement.

Having experienced the ownership of my own body taken away from me, I know how it feels to look in the mirror and feel completely powerless. To feel alienated by my own reflection. It stuck so deep that even after working hard and losing a lot of weight, which resulted in the comments about my larger size gradually ending, I still felt like the same disgusting unlovable girl. Because the focus was still on how I looked on the outside. It had just shifted from a focus on me being fat to a focus, or rather an intense obsession over not gaining the weight back. This obsession gradually led me to develop an unhealthy relationship to food and weight that I struggled with for years. 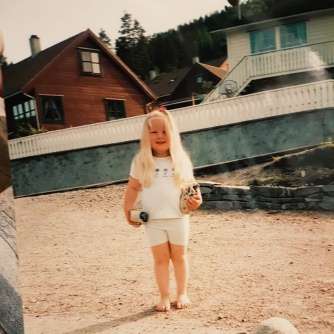 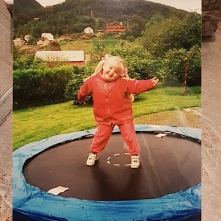 The extreme focus on the outside that we have in our society today is unhealthy and dangerous. We live in a society where social media and marketing are ripping holes in our self-confidence by portraying the unattainable as the normal. Holes that we presumably can fill by consuming products. By trying to mend our souls by consuming we keep ourselves busy enough on the outside so we don’t have to deal with the inside; the place where real healing finds place.

It has taken me years and years to learn to love myself but thankfully I have finally realized how incredibly valuable and beautiful I am. My value is not determined by how attractive I am to others or by how much someone else wants my body. And by not letting anybody else be the judge of my value, I am now free. I have liberated myself from feeling like I am not beautiful enough, good enough or desirable enough. Like I am not ENOUGH. Because it’s not the men sending me nasty looks, the bathroom scale or society’s beauty standards that gets to decide my value. I do. 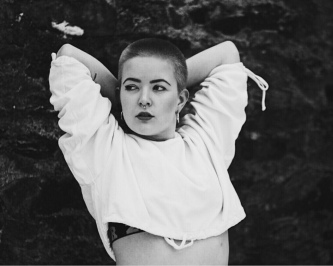 We need to stand up for each other as women, support and encourage each other, and we need to SPEAK UP, so that the future generation of women will not have to face the struggles that women all over the world has to face today. We have an obligation to create a world where being female is no longer to our disadvantage. Let’s make that our legacy.

There was an error retrieving images from Instagram. An attempt will be remade in a few minutes.